I was praying today and thinking about an article I read about the hardening immigration policies in Austria. We had to leave the country over a week ago because our application for a residence permit was dismissed. We found out on a Saturday and left in less than a week. It was and is stressful, but I am so thankful that we are able to leave voluntarily this way. I was thinking about those immigrants and asylum seekers that don’t leave voluntarily. Why don’t they leave? Some don’t want to leave because they fear that they will not have work, or not be able to take care of their children, maybe even children they decided to have while in Austria. Some may even be going back to hostile situations, not even sure that they will be able to live or survive.

I was thinking about this not because we had to come back, but because I found out that a friend of mine is being deported. Uche and I have been meeting together every week for the last six months or so. He came from Nigeria over six years ago when he was only a teenager. Uche can’t read. I met him when I went over to his friends house to lead a Bible study. He was the sweetest guy. He had a gentle and trusting way about him. I could tell he had a heart to serve. He loved the Lord.

Uche really wanted to participate in the Bible study. My friend and I who were co-leading did our best to help him, but Uche quietly stopped coming one day. My friend decided to teach him to read. When he left on furlough six months ago, I took over. Uche and I became friends. I enjoyed getting to know him. I enjoyed the challenge of teaching him to read. He is reading short words and sentences now but I wish we could have read the Bible together. That was his goal.

I don’t know why Uche is being deported. He certainly is not the model immigrant. His German wasn’t great. He sold newspapers to make money. “Schwartze Arbeit” is what they call it, “working black”-illegally. It is very common. He was a refugee. He was accepted into the system, but he either didn’t take the systems help or the system just didn’t’ help him much. I’m not trying to blame anyone. I’m just sad for my friend and wish that he could have been better off for his six years spent in Austria.

I’m also sad that another believer will be leaving a country where the evangelical population is so low (some estimate as low as .5 %). In many ways I am losing a coworker in the gospel. Please pray for Uche. Pray that he will be able see God’s hand in this and that he would use this time to grow in his faith. Pray also for more workers for Austria, weather they be nationals, missionaries sent by large congregations, or missionaries sent by persecution as the believers in Acts 8:4 who were scatterd and went everywhere preaching the word. 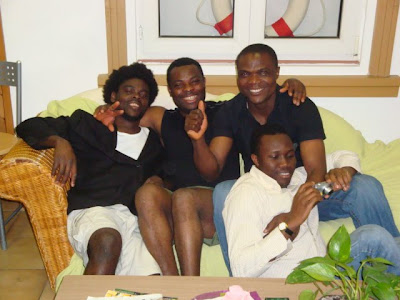 A picture of our Bible study. Uche is on the far left.