It was after lunch and Matt had left the house for an afternoon meeting. Feeling oddly energetic after a full morning of German class, and after having gone to bed at 12:30 the same morning following a late night at the Oasis, I decided to straighten up the home a bit. To me, there isn’t a better feeling than clean sheets. “All right,” I thought, “Time to change the bedding!” As I ripped off the old bedding, threw it in the hamper, then got out a clean sheet and duvet cover, I thought, “I’m so thankful to have two sets of bedding.” Since laundry here is hung up to dry, it’s very convenient to have two sets of bedding. I continued in “straigthening-up” bliss as I put on the clean fitted sheet. I remembered how I used to think that our thin, European-style foam mattress which sits on wooden slats fitted into the bed frame was strange, but now I enjoyed how lightweight it was. It was very nice that I could, all by myself, easily and quickly put on the fitted sheet!

Next came the more difficult part: fitting the duvet cover on the duvet. I had never done this myself, since Matt is so skilled at it. “But,” I thought, “how hard can it be?” After all, I had remembered Matt saying that it’s like putting on a big pillow case. So I unbuttoned the cloth buttons of our Ikea duvet cover and spread the cover flat on the bed. I tried to stuff in the duvet as uniformly as I could, but soon I discovered that there was no way my short little arms could stuff the entire duvet up to the top of the cover, a distance of two meters or so, without literally diving in with my whole body and doing the army crawl. Hmmm…I took a moment to think. Aha! I bunched up the mass of duvet and cover and marched down the hall to the living room. I stood on the couch, and holding the partially-covered duvet above my head, I began to shake and turn the whole mess in a clockwise manner, in order to get all of the nooks and crannies of the cover filled. Twenty minutes later, parched and sweating, I had achieved a small victory!!! 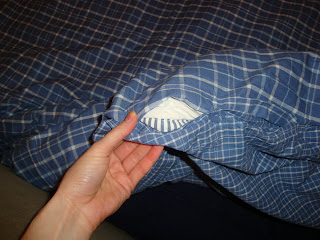 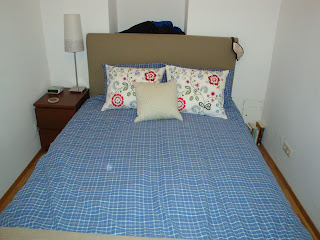 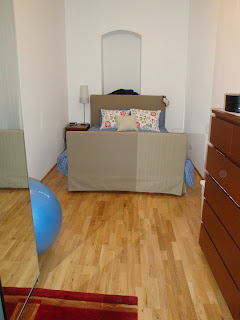 1 thought on “A Little Housework Fun, aka, “We Do Things Differently Here in Europe””